Combat Patrol is a recent set of WWII skirmish rules by Buck Surdu.  I think they are the most innovative and easy to use set of rules for this period I have seen.  Using cards to resolve all the actions in the game keeps the focus on the game and not on rules and charts.  In my experience, after two or three activations new players are having no trouble with understanding how to play.

I had done one Combat Patrol game with my local gaming group.  They liked it, and asked for another one.  Some of the main people were out of town this week, and we only had 3 of use.  I used a scenario my brother did with another set of rules.  Always an iffy idea.  It goes to prove once again, that no scenario survives contact with gamers.

The scenario was set in France, 1940.  The French are trying to wire a bridge to blow.  There is a security force of one squad and an MMG.  Another squad plus a Panhard armored car is entering across the board because they have heard that there is a German force coming to keep the bridge from being blown.
The Germans have two squads, an MMG in a captured French truck (need to buy some German trucks) and a Pz i and a Pz II they have managed to get across the river upstream. 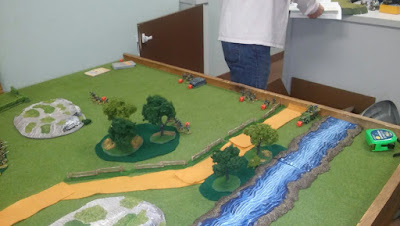 This is the German starting position after some activations.  The orange dice are the activation dice.  Each leader rolls a die at the start of the turn, and the dice is placed beside the unit.  Buck usually uses a more subdued die color for this.  As I wanted to take pictures, I used a brighter color.  There is an activation deck with numbered cards.  That deck is shuffled and you turn a card.  The units with that number by their leader are activated.  There is a process for deciding which unit goes first when two or more units have the same number.  This is all explained in Buck's Youtube video about the activation process.  https://www.youtube.com/watch?v=0G9UBH2ccdk

Now, as I said, no scenario survives contact with the players.  Light tanks can move quite a ways in this game.  Don, playing the Germans, proved this on his first activation when the Pz I went all the way up the road and attacked my French engineers. 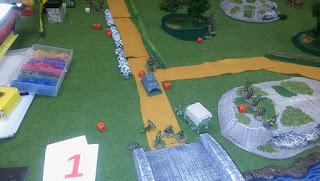 He missed, but unlucky for me the same number came up the next card turn.  His Pz I was now firing 2 machine guns at close range with no moving mod.  He started picking apart my engineers before my security force could react.  I was playing the basic game, since it was fairly new players.  there are rules for reaction fire that might have affected his ability to do this.  Another lesson learned.

The rules work very well.  You use the cards for moving, firing, determining if cover affects the shot, where the shot hits, etc.  You can use either the basic rules for wounds, where a wounded figure only activates on certain cards, or you can use the more detailed rules that show where the figure was hit.  The cards also do the vehicle combat.  The players quickly know what they need to hit with their units and the modifiers, which are on the cards.  It all goes very smoothly.

Buck has also done a Youtube video of how resolving hits works with armored vehicles in the game.  https://www.youtube.com/watch?v=AIFdOkNWsfo

I am enjoying these rules.  After I play a few more times I plan to take them to a con in the future to demo them.